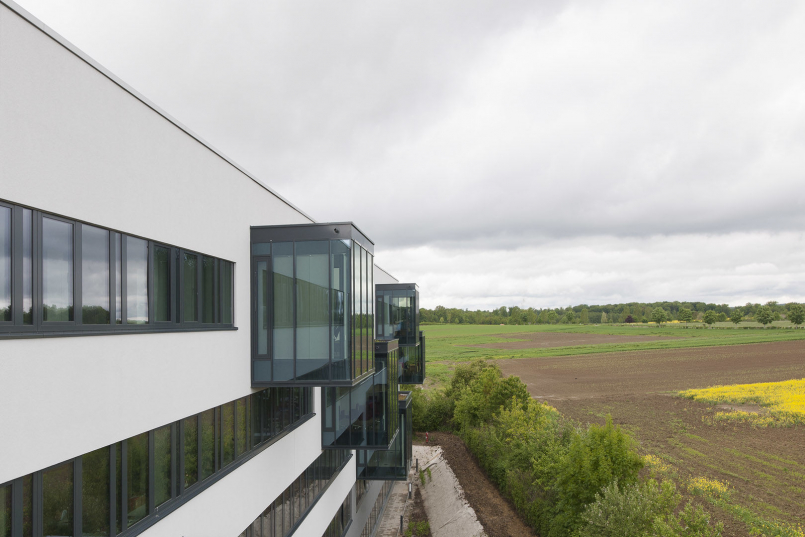 The principal's mission, collaboration between project developers Progroup and Schuler, was ambitious: Erecting a passive building in the heart of Luxembourg that would satisfy three international environmental seals of approval: BREEAM (English), HQE (French) and DNGB (German). The result, Solarwind, has therefore become a symbol for sustainable building by using environmentally friendly materials and the application of energy-efficient technologies such as solar panels, wind turbines and geothermal energy. Custom-made solution "It goes without saying that lighting had to be in the same line," according to Philippe Erpelding, ETAP sales manager for Luxembourg. Our task was obvious: the lighting's power consumption had to be less than 5 Watt per square metre. Due to the building's specific requirements, it was furthermore immediately clear that a tailored lighting solution was necessary. The integration of light control and other techniques were high on the agenda as well. Lastly, the luminaires' design had to be in line with Solarwind's ecological image." Energy-efficient lighting, made to measure, with a stylish design, was right up ETAP's alley. For office lighting, together with the Boydens consultancy we developed a modular reflector luminaire with fluorescent lamps. The luminaire's housing also incorporates fire detection technology.. Luminaires near the outside windows are fitted with an ELS sensor, which dims the light depending on available daylight. Each module is furthermore fitted with a motion detector, which switches on the light whenever someone enters the office. Three technologies in a single luminaire "Flare downlights are featured in the corridors," Erpelding continues. "These LED downlights have a high specific luminous flux. We have provided for air extraction and in addition have integrated the K9 module for emergency lighting. It goes without saying that the combination of three technologies in a single luminaire represents a major asset both aesthetically and practically. "The lobby and corridors between offices feature Elisse luminaires in surface-mounted version. For the emergency lighting in the corridors, ETAP was able to convince the client to go for the aesthetic and energy-efficient K9 LED lighting. "ETAP's lighting solutions are perfectly in line with Solarwind's energy-efficient message," concludes Philippe Erpelding. "And power consumption totals 4.8 Watt per square metre. Mission more than accomplished, I'd say." Project sheet Lighting: -293 x custom-made reflector luminaires -308 x D42 downlights -70 x Elisse Emergency lighting: -334 xK2 luminaires -154 x K9 luminaires -35 x KB luminaires -EBS Dynamic Light