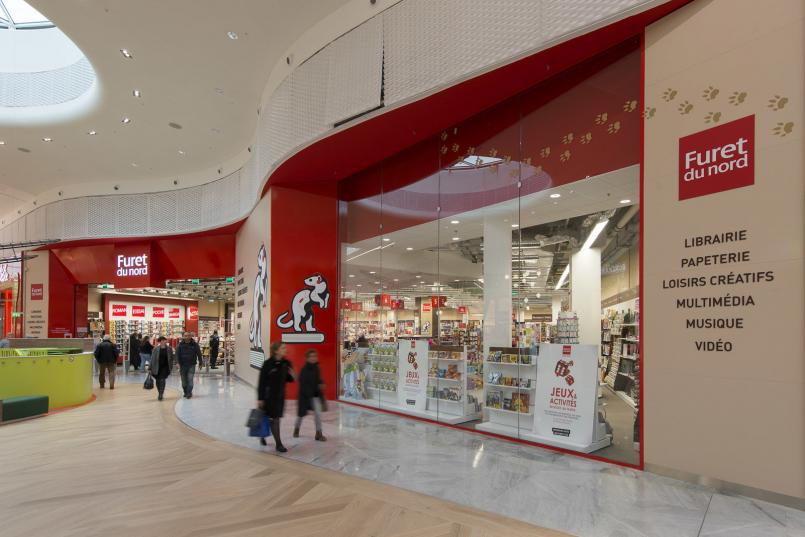 Le Furet du Nord, a French book store chain, has opted for ETAP lighting since 2007. The Aéroville branch opened at the end of 2013 in an ultramodern shopping centre just a stone's throw from Charles de Gaulle airport. The new lighting puts the bestsellers literally in the (LED) spotlights.

"The stores in le Furet du Nord are split into various zones, each requiring specific lighting," according to Pascal Morin, ETAP sales manager for northern France. "Thanks to our extensive range and tailored solutions, we were able to deliver the most suitable luminaires for every zone." At the stores entrance customers find the latest books on offer. Current bestsellers are literally in the spotlight with tailored directional LED spots. E5 lines with asymmetric light distribution highlight the racks against the wall. Line configurations of R4 suspended luminaires illuminate the aisles, whilst E5 luminaires hang over the sales zones. Lastly, the till zone is illuminated with D42 downlights with LEDs. GreenLight Partner The collaboration between le Furet du Nord and ETAP, together with TGMP architects from Lille, dates back to 2007. For the renovation of the branch in Villeneuve dAscq, ETAP developed a lighting solution, which drastically reduced energy consumption, whilst increasing lighting levels and visual comfort. Since then, ETAP has become le Furets preferred lighting partner. "Le Furet du Nord strives for energy-savings in all its new-build and conversion projects," says Pascal Morin. "That is why it increasingly switches to LED lighting. In this respect too, ETAP, with its extensive LED range, is a well-chosen partner. In the current renovation of the Lille store - the largest Furet branch in Europe - LEDs have almost become the order of the day." Le Furet were rewarded for their efforts: in 2007 the chain store became a GreenLight partner. The GreenLight programme, an initiative by the European Commission, supports companies that opt for energy-efficient lighting. As "Main endorser" of the programme, ETAP has supported dozens of customers in securing a GreenLight certificate. Emergency lighting with EBS Compact ETAP also supplied the emergency lighting, also with LEDs, to the Aéroville branch: signage and anti-panic lighting from the K9 series. The luminaires are connected to an EBS Compact battery system, which makes maintenance and follow-up of emergency lighting a whole lot easier. Project sheet - 107 suspended E5 luminaires - 36 adjustable LED spots - 31 D4 LED downlights - 32 suspended R4 luminaires - 32 K9 emergency lighting - EBS Compact