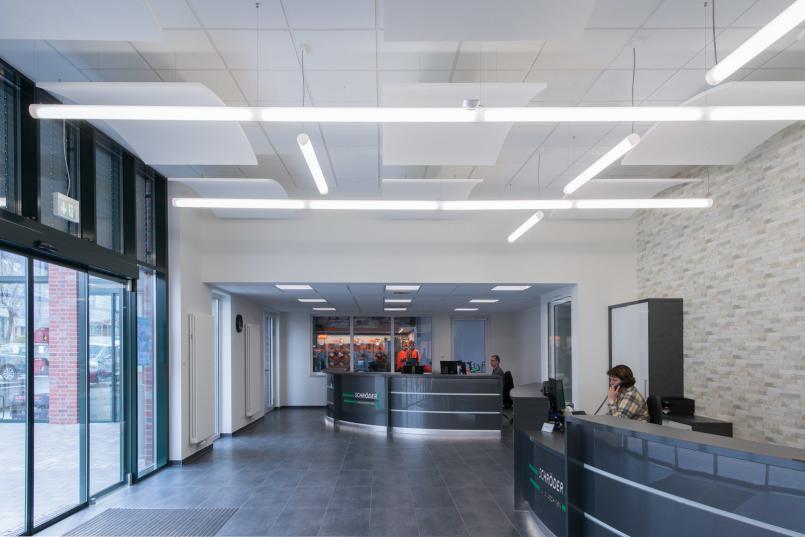 The German company Schröder Landmaschinen was fully focused on innovative technology for the expansion of its headquarters in Wildeshausen. The Excellum2 light control system fits in perfectly with this ambition.

In 2015 headquarters in Wildeshausen underwent a thorough makeover. A new three-storey building houses an office complex with a usable surface area of 1000 m² and a 772-m² showroom. The focus was on sustainability and innovation in the design of the new building. ETAPs Excellum2 light control system played a major part in this process. Future-proof Schröders facility management did not choose Excellum2 for no reason. Decisive factors included energy efficiency, user-friendliness and flexibility. In addition, Excellum2 is able to communicate with various other protocols, which makes the system future-proof. In consultation with the client, the installation system structure was established in advance by ETAP and consultancy LBT-Nord GmbH. In this context, needs and requirements in terms of lighting were studied for each space or zone (offices, showroom, conference rooms, corridors, etc.). On this basis the various lighting scenarios and controls were established (see box). Smart building The next step consisted in the drawing of the location of the luminaires and other components (push-buttons, DALI switches and multi-sensors for motion detection and daylight-dependent control). In addition, the alarm installation was integrated into the light control. When at the end of the day the alarm is activated, the light fixtures are automatically switched off, except those that have to stay switched on for safety reasons. In the beginning of the working day, when the alarm is deactivated, the lighting installation switches over to normal calendar mode. During a break-in alert, all luminaires are switched on with full illuminance. A good example of a "smart building: the integration of several building techniques to maximise efficiency of the various technical installations. PROJECT SHEET Light control - 2 Excellum2 controllers - multi-sensors for presence detection and daylight-dependent control - DALI push-buttons and switches for manual light control Lighting - US softlights with LEDs in offices and conference rooms - D3-downlights with LEDs in corridors - R8 diffuser luminaires in reception area Emergency lighting - K1 and K9 escape route and anti-panic lighting - K7 signage