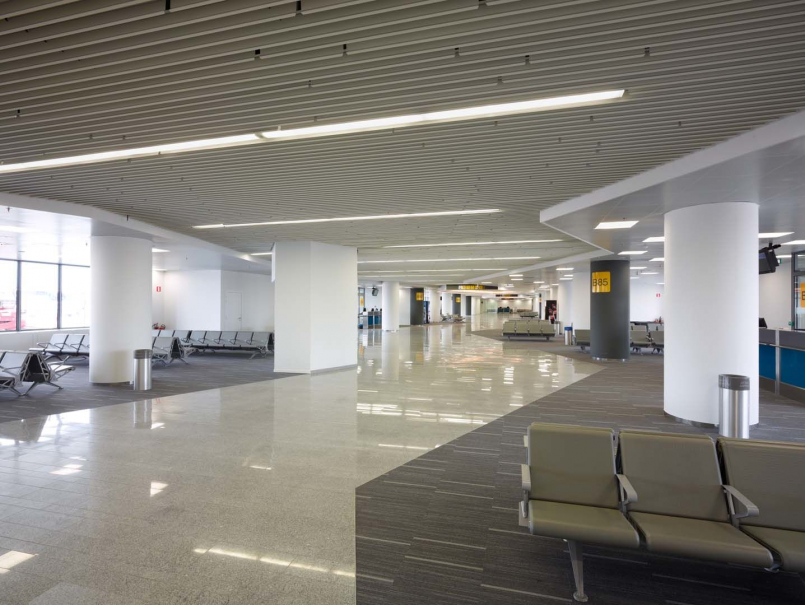 After 17 years, terminal Pier B of Brussels Airport was due for renovation. Design agency Grontmij Belgium NV from Hasselt took up the challenge to turn the busy, elongated hall into a pleasant place. They succeeded by making several clever architectonic changes and using appropriate lighting.

Pier B is the terminal at Brussels Airport for flights to and from countries outside the European Schengen zone. The terminal has been in use since the end of 1994, and recently underwent a thorough renovation. "That was a real challenge," says Harry Verheyen of Grontmij Belgium NV. "Thousands of people pass through a terminal like this every day, and there are always loads of people milling around. Our task was to give the spaces a calm, pleasant atmosphere."

Breaking up straight lines
The designers have given the terminal a subtly zig-zagging central walkway, to soften the linear nature of the 650 m long space. Islands were created along the sides, as oases of calm. "It was crucial to break up this long straight line," explains Verheyen. "We carried this through into the ceilings. Above the islands we placed a frame ceiling, above the walkway an open ceiling system with a transverse linear structure."

More efficient and more comfortable
Kardó 90 lighting strings were built into the open ceiling system. "The modular system plays a major role in the success of our design," says Verheyen. "Kardó 90 works with a diffuser and gives out soft light with no loss of efficiency. It is perfectly visually integrated into the open line ceiling. And the lighting level is automatically adapted to the incoming daylight thanks to the daylight-dependent lighting control. Not only does this save large amounts of energy, it also creates more comfort and calm, essential in this busy space."

Fast solutions
During the renovation work, ETAP had to provide fast solutions. After all, a vertical strip ceiling had initially been planned, and only at the last minute was it decided to go for a system with vertical ceiling panels. "We had to make changes in extremis," says Tom Daniëls from ETAP. "To achieve the right architectural effect, the underside of the Kardó 90 luminaires had to lie in a single plane with the underside of the ceiling panels. During construction we therefore decided to pre-assemble the luminaires in out workshops and fit them with special auxiliary and adjusting pieces. A further advantage was that the installation on site took much less time."
K9 emergency lighting with LED was also integrated into the Kardó 90 lines. This emergency lighting was linked to the ETAP Safety Manager (ESM) to monitor the proper function of the system centrally and quickly trace any faults.